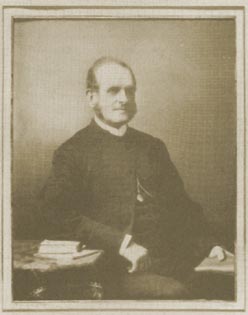 The Representative Body of the Church of Ireland, in whom copyright is vested, has been kind enough to supply the writer with the Clerical Succession List for our Parish of Booterstown and, with their permission it is herewith reproduced.

With the help of the diocesan office, Robert Knaggs has updated the list:

*(Since the latter’s appointment as Rector in Kilmore Diocese, no further curates have been working in Booterstown.)

This is the point at which the dedicated service of two lay readers must be noted.

and the Church of Ireland, in future years will rely heavily on men and women of their calibre and ability.

There is one clergyman in this Succession List who remains somewhat of a “mystery man”. Rev. George Williams who assisted Rev. Robert Nixon in the years 1850-1855, yet does not appear in the “official list”.

(Note the sturdy wooden plinth on which the lectern stands – made by Glascott Symes (Senior) of this Parish.)