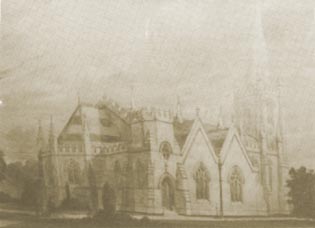 In the years following, the Parish of Booterstown expanded and the Church of St. Philip and St. James was found to be totally inadequate for the growing congregation.  1867 saw a movement to enlarge the building.  £1,600 was collected, the edifice closed temporarily, a chancel and south transept added, and on 2nd May, 1868 it was re-opened amidst great rejoicing.  A special service attended by a large congregation heard Dr. Baylee, Principal of St. Aiden’s College preach on a text from Psalm 84 “How amiable are thy tabernacles”.

Rev. Beaver H. Blacker was in charge of the Parish during the extension phase – the result must have pleased him and the congregation because, eight years later, (during another incumbency) a further major move was initiated.  A North transept and organ chamber were built resulting in the appearance of Booterstown Church as we see it now in 1984.

Blacker was a man who added to his faithful pastorate and building zeal the distinction of being a historian of no mean ability.  He chronicled places and events in the Blackrock, Sandymount, Ringsend and Donnybrook areas and these are fascinating and eminently readable.

A sad note to end on Blacker – the visitor to Booterstown Church will see the death of his 14 year old son, Fleming, recorded on a South Transept tablet.

His successor, in 1874, was Rev. John Lombard, who continued, as noted above, Blacker’s work of extension and commissioned the pulpit, a gift from himself in 1888 “in memory of his beloved mother” as a tablet on it tells.

Two years later, as a token of personal regard to John Lombard, Booterstown parishioners had the prayer desk on the other side of the chancel made and few will argue but that the two pieces are symmetrical and greatly beautify the building.  A note on Lombard must record that he was, during his term of office in Booterstown, Chaplain to the Lord Lieutenant.